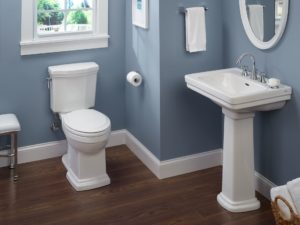 Nothing is worse than having plumbing issues. Plumbing problems — from leaky toilets to issues with your kitchen sink — can quickly become a major nuisance, even leading to property damage. Not only that, but dripping faucets can drive you nuts with the constant sound of water drops hitting the sink. We’ll review some of the most common plumbing issues, which could lead to the need for professional plumbing services.

Toilet difficulties can be a pain, from constant water running to not enough push to get everything down. Here some of the most common troubles you may encounter with your home’s or business’s toilets.

1). Clogged toilet: this is a common trouble, which can arise due to several problems. You may have a clogged toilet due to flushing too much toilet paper, feminine sanitary products, or maybe a rag was accidentally flushed. Flushing improper items down the toilet can cause a clog.

Clogs can also occur if anything causes a blockage in the toilet’s outlet plumbing. Another dilemma is a blocked drain line or a drain line that’s not been completed. If using a plunger or other method doesn’t release the clog, it may be time to call a professional plumber.

2). Partial flushing: perhaps you’re having an issue with a toilet that only flushes part way, leaving the contents behind. There are several causes of a partially flushing toilet:

3). Issues with the commode refilling: this is another common problem with toilets. It can be caused by a leak between the tank and the toilet bowl, which causes the commode to refill automatically. Another nuisance is a toilet constantly refilling. You flush and expect the tank to refill. This is normal. However, some toilets may constantly refill, running water continually into the bowl. This uses excess water and can cost you a mint. One of the most common causes could be a loose flapper valve.

5). Toilet handle: even this part of the commode can fall apart. If the toilet handle tends to stay down, the toilet may run constantly. A loose handle can also be a nuisance. This can be caused by dirt and debris building up on the handle’s workings inside the tank. Corrosion and rust can also play a part in toilet handle problems.

6). Rim holes: the holes just underneath the toilet bowl rim help to flush the contents down. However, they can become blocked due to hard water minerals or other debris. Blocked rim holes keep your toilet from flushing with full force to empty the contents of the toilet bowl.

Toilet Repair or Replace – Which is Right for You?

Regular maintenance, such as cleaning and fixing small troubles, can keep your toilet working for years. However, over time it will become necessary to replace your existing toilet with a new one.

You might consider replacing your current toilet if it has issues on a regular basis. You no more than get one issue fixed, then another one pops up. Replacing parts over and over can be expensive.

Your toilet’s porcelain can also become cracked, which could eventually lead to major leaks or even flooding of your home. If your toilet constantly clogs, this is another sign it’s time for a replacement. A new toilet can be a great asset. Not only will it help you save money, but you’ll also be conserving water at the same time.

We all have a love-hate relationship with sinks, whether they be bathroom or kitchen sinks. Complications can range from leaky sinks to clogged drains and leaky/clogged faucets. You may even have an issue with the garbage disposal if it’s broken or clogged.

It’s possible to fix these issues yourself. However, if the problem keeps coming back, then it may be time to consider hiring a professional. A plumber will check to see what’s causing the issue and get it fixed properly.

When it’s time to replace your bathroom or kitchen sink, there’s a lot to keep in mind. For one thing, you’ll have to consider the type of sink you’d like. For instance, do you want or need a drop-in sink or an undermount sink? Maybe the utility and flexibility offered by a farmhouse sink would be the better option. Or would brushed steel sinks in the kitchen be more modern? Would porcelain be a better choice? What about the bathroom? Would an acrylic sink be best there?

Next, you’ll have to consider the proper measurements of the sink. Do you know what parts need to be measured and how to measure them properly? These are important considerations.

Once you’ve decided on the type, style, and shape of the sink, you’ll have to install it. Will you do the install? Do you have the knowledge and experience necessary? Do you know how to caulk and seal the plumbing to avoid a leaky sink?

If the answers are mostly no, then you should consider hiring a professional. Look for a licensed plumber to install the sink(s). A licensed plumber provides the expertise needed to install a sink properly. You won’t have to worry about improperly installed plumbing, which could lead to costly leaks and property damage. You want to avoid a leaky sink at all costs.

Faucets are another common plumbing problem, from the bathroom to the kitchen and the laundry room. They can quickly become unattractive and cause an entire room to look dilapidated. Leaky faucets can be a pest, too.

The most common faucet issues include:

As you can see, toilets, sinks, and faucets can suffer from a multitude of irritating troubles. Some of these issues you can fix yourself. However, if these issues are recurring, it’s generally a good idea to call in a professional plumber. They will fix and install things in the right way, to avoid future mishaps. Baikal Services® is only a call away. Reach out to us at (206) 799-3035, or fill out our online schedule service form and we will be there at no time to take care any of the plumbing problems for you.